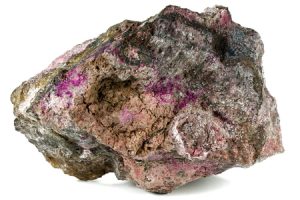 According to London-based research firm CRU Group, global consumption of cobalt in 2011 was roughly 75,000 tons. In 2018, cobalt consumption exceeded 122,000 tons. This precious metal is used to make everything from jet engines to the lithium-ion batteries in our phones, and as a result cobalt consumption is on pace to rise 8-10 percent a year for the foreseeable future.

Now, for the first time in four decades, cobalt mining operations are coming back to the U.S.

In fact, North America’s largest reserve of cobalt is located right here in Missouri. In Madison County, an estimated 35 million pounds of recoverable cobalt can be found in an old lead mine that restarted operations in 2018 under the direction of mining firm Missouri Cobalt. Meanwhile, another firm called eCobalt is in the process of opening a Cobalt mine in Idaho as well.

“There’s a few places where you can get ethically mined cobalt and we want to be one of them,” said Missouri Cobalt CEO Michael Holloman in a recent interview. “We would like to think that that gives us an advantage.”

More than 60 percent of the world’s cobalt currently comes from the Democratic Republic of Congo, which has been heavily criticized for using slave labor in its mines in the past. These new cobalt mining operations in the United States could not only help to boost the American economy, but also provide other countries with a more ethical source of this vital commodity.

Here at Rackers Equipment Company, we’re proud to provide the mining firms in our area with the new and used equipment they need to get the job done right. Browse our inventory online or give us a call to learn more about any of the equipment we have available today.